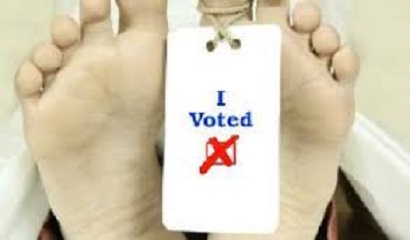 VEN (WASHINGTON) — Consuela X was exhausted after a long day of voting in California Tuesday, but overjoyed with her new iPad, a gift from her new friends at the Alliance of Californians for Community Empowerment (ACCE).

“The nice people bussed us all over the state. I must have voted 200 hundred times! I personally voted for Senor Newsom 20 times. Is hard to remember. And so many different names! Dios Mio! Such a long day! It reminded me of elections in Honduras!”

A much different scene unfolded in the parking lot of a Broward County McDonald’s early Wednesday morning, where weary voters were given vouchers for free meals and sodas, instead of the promised Nike‘s and iPhones as Center for Popular Democracy (CPD) paid volunteers worked feverishly to clear the buses so they would not be charged for an extra day.

“Damn!” a disappointed Shelonda X told one CPD worker who handed her a bag of luke-warm Egg McMuffins. “Ain’t my fault Andrew and Stacy didn’t get elected. I voted 40 times for each of them! What I gonno do with cold brefast food from Mickey D’s? Gimme a iPhone6 like y’all promised!”

In Wisconsin, two-term governor Scott Walker told reporters late Tuesday that as hard as it was losing a close race to Democrat Tony Evans, “the worse part of the election was having my dead father register as a Democrat and vote not once but THREE times for my opponent!

“I’ll never understand why he did that!”

Meanwhile, FOX NEWS spokesperson Alger Hiss told reporters early Wednesday that the decision to make the call that Democrats would win the House 90 minutes before the polls closed on the West Coast, came from “a former senior US Intelligence official” who — VEN learned — is currently working as a senior consultant for Dominion Voting Systems, the company that supplies voting machines for 22 states, including California.

“We also did a series of google searches,” Mr Hiss explained, “and had a lengthy con-call with Nancy Pelosi, Valerie Jarrett, Jeff Flake, and Nate Silver.

“That’s like the textbook definition of due diligence, OK?

“So to contend that we were trying to influence the election and help the Democrats retake the House is just ridiculous!”