VEN (CAMBRIDGE) — After watching a Marx Brothers film festival at the

Brattle Theatre in Harvard Square last weekend,  a confused,  off-medication Elizabeth Warren (D-MA) told the panel on MEET THE PRESS Sunday, that she too had been the victim of sexual harassment.

“When I was a baby law professor, I was chased around my office by the head of the department, Dr Rufus T. Firefly.  And later, by one of his associates,  a strange, little curly-haired  deaf/mute who used an old-fashioned car horn to communicate — perhaps he was a janitor; I really

“I was trying to talk calmly. And at the same time, what was flickering through my brain is, If he gets hold of me, I’m going to punch him right in the face!

Why It Matters: Ms Warren is a United States Senator.  That she sees herself as either the sultry femme fatale Raquel Torres in Duck Soup  — which to be fair, is unlikely — or Tretino’s young blonde secretary Verna Hillie is disturbing,  especially since  — as everyone knows — 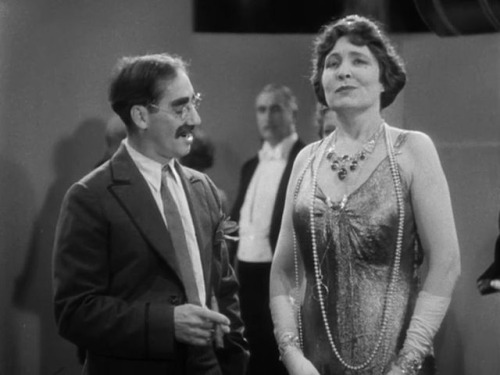 she bears a more striking resemblance to the Margaret Dumont character, Mrs. Gloria Teasdale, whom Dr Firefly — in an effort to save Fredonia and prevent an unnecessary war with Sylvania — is trying to marry for her money.

Additionally,  one wonders why Ms Warren did not reference Horse Feathers and  Professor Quincy Adams Wagstaff, which would have been more in keeping with her academic background as a minor plagiarist and mediocre law professor who — after discovering her pretend Cherokee heritage — landed a handsome, undeserved sinecure at Harvard.

Was is because if Ms Warren  referenced Horse Feathers it would draw unsympathetic comparisons between her and the film’s disingenuous, sultry femme fatale Thelma Todd, who is trying to seduce Professor Wagstaff and steal the football signals for the upcoming game with Darwin College?

Dr Jerome Freedman from Columbia University says yes.  The world renown expert on behavioral psychology told VEN that the better choice would have been Animal Crackers, but he believes Ms Warren intentionally avoided that comparison as well,  because of the song Hello, I Must Be Going,  which could be used against her to great effect in her 2018 re-election campaign.

It raises serious questions about her judgment, honesty,  and credibility that should concern Massachusetts voters when they go to the polls in November 2018.