VEN (ROME) — Secure in his virtually impenetrable Vatican citadel,  which has some of the most restrictive immigration policies in the world,  the Jesuit Red Pope reluctantly rereads 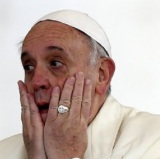 Aquinas’ Summa Contra Gentiles, but once again misses the part about Islam being essentially a carnal Christian heresy.

Pope Francis to activists: Stand with migrants, do not deny climate science, there is no such thing as ‘Islamic terrorism’

In a letter written to a leaders of grassroots organizations and social movements meeting this week in California, Pope Francis said Christians must resist the temptation to demonize others, protect the earth and fight against “the invisible tyranny of money that only guarantees the privileges of a few.”

Writing that the world is in the midst of an “historic turning point,” Francis said the “worsening crisis” presents both danger and opportunity, using language sure to recall tensions between some Catholic leaders and the fledgling Trump administration.