VEN (CAMBRIDGE, MA) —  Cheered on by angry chants of RESIST! RESIST! from a small angry crowd of zaftig purpled-haired very angry women dressed like outraged, very angry vaginas, an equally angry, unmedicated Elizabeth Warren (D-MA) told reporters Monday that she is “sick and tired” of  “Traitor Trump” questioning her self-documented Native-American heritage and degrading proud, noble native Americans who — like her ancestors — were forced onto government reservations “by cis-heterosexual white supremacist males,  just like that traitorous, orange-faced, fascist baboon in the White House.”

“You know I never told anyone this before,  because it was a private family matter, but my ancestor Debbie Edwards was kidnapped by Indians right after the Civil War when she was barely 15 and the family was living in West Texas.

“Eventually she was rescued by her uncle, Ethan Edwards, a former Confederate officer, but not before she became the wife of a famous Comanche warrior chief, Cicatriz, and bore him a child, Rachel.

“When Debbie and her daughter Rachel came back to us, Rachel eventually fell in love and married a local rancher Ben Zachery, whose mother  Mattilda Zachary, was related to my father Donald Herring’s great-great grandmother, Laurie Jorgensen.

“It doesn’t get more Native American than that, Donnie!

“You know, folks used to say that there wasn’t a bronk alive that Uncle Zach couldn’t break. 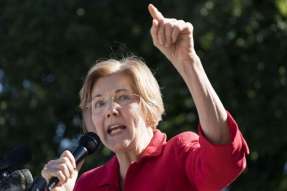 “And Traitor Trump,  I’m here to tell you that no matter what you do, no matter how much you try to insult me,  bully me, intimidate me,  try to scalp me, you will NEVER break THIS wild proud blonde-haired high-cheek-boned Palomino native-American bronco OR this wonderful, inclusive undocumented-citizen-friendly country YOU DIDN’T BUILD that you’re trying to give away to the top 1% so they can keep paying off their crooked lawyers and stripper girlfriends — no matter how much Putin is paying you!

“That’s right, Donald — like my namesake Massasoit, I won’t back down!  You will never be THIS Tonto’s Kemosahbee!

“So keep trying to sell out America to Russia and North Korea and your Wall Street cronies and your Nazi pals in Poland and China and Fly Over Country and HANNITY and FOX AND FRIENDS and  your disgraceful male-toxic, cis-gendered Miss Universe Pageant and  underpaid glass-ceilinged women caddies at your Putin-financed golf courses!

“Keep it up, Traitor Trump!

“And I’ll tell you the same thing  Ethan Edwards would tell you if he were here right now,  standing beside me, next to Dorothy Jordan and Lillian Gish, looking right into your lying Putin Puppet eyes — That’ll be the day!”

UPDATE: VEN has confirmed that the evidence Senator Warren asserted as proof of her Native-American heritage at a press conference in Cambridge, MA on July 23, was in fact the story-lines of two classic 1950/60s American Westerns (The Searchers and The Unforgiven) that the beleaguered, truth-challenged Senator apparently misappropriated and conflated — right down to the character’s names, the photographs and back-story released to reporters in her press kit,  and the signature phrase (That’ll be the day!) used repeatedly by John Wayne’s character Ethan Edwards in John Ford’s The Searchers.

In response to our inquiries, Senator’s Warren’s office released the following statement:

I am very proud of my heritage. These are my family stories. This is what my brothers and I were told by my mom and my dad, my mammaw and my pappaw. This is our lives. And I’m very proud of it.

That my family stories seem to have certain events in common with some old movies that I’ve never seen doesn’t strike me as strange at all.  Perhaps these movies were based in part on my family’s history.  Perhaps it was just a coincidence.   It’s very hard to say.

Many people,  for example,  think that I might be Nick Nolte in drag, especially since we both wear glasses and have never been photographed in the same room together.  Frankly, I find that one pretty hard to believe,  even for someone like Donald Trump, but I have no control over what other people may perceive or think.

I only know and cherish my own personal truth that is real to me in my reality.

Have a wonderful day!  And Keep Resisting!