VEN (WASHINGTON) — In what even ultra-liberal CNN and MSNBC are calling a misguided attempt to pander to African-American voters, Congresswoman Nancy Pelosi (D-CA) told reporters Friday that she will introduce a bill next week co-sponsored with Sheila Jackson-Lee (D-TX),  to ensure that black people are equally represented in the pool of names randomly selected for hurricanes. 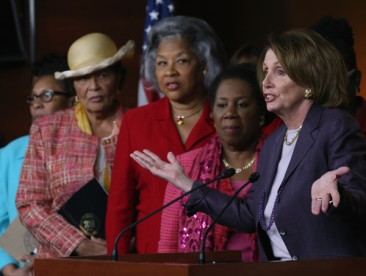 Ms Jackson-Lee has been militating for such a change since 2003, when she first argued that the National Hurricane Center’s  protocol for hurricane naming was in violation of the 14th amendment.

Flanked by several members of the Congressional Black Caucus, an ebullient Ms Pelosi explained that not only is  the change long overdue, but giving hurricanes African-American names would actually prevent the kind of wide-spread devastation caused by hurricanes with names that are ‘too lily white’.

“According to research from Stanford University’s esteemed  Wolfson Center Of  Climatology,” Ms Pelosi explained, “if we had, say, a hurricane Shaniqua instead of a hurricane Nancy, we could expect the destruction to be greatly reduced!

“There would be very little flooding, and suburban, residential areas would be left virtually untouched.

“However — depending on the severity — we could expect a few police cars to be overturned, random store windows to be smashed,  and tires and debris to be set on fire, but this would be an extreme situation, a category 11 storm or higher,  which we almost NEVER see!”

The study Ms Pelosi cited — considered controversial by some in the scientific community — was based on a small, rogue tropical storm that baffled scientists and meteorologists when it came ashore in Puerto Rico in 1998 and only destroyed liquor stores,  dollar stores,  and weave and nail salons, before suddenly changing course and heading back to Africa.

In response to criticisms that she was somehow conflating hurricanes with inner-city riots, the Congresswoman’s office issued a brief statement late Friday asserting that Ms Pelosi — “a strong, life-long supporter of the African-American community” — meant nothing of the sort, and that “she stands by her earlier statement that hurricanes with African-American names would likely be smaller, of briefer duration,  and focused on urban rather than suburban areas.”