VEN (ROME) — In a shocking development, moribund, America-last, integrity-light, Keating-Five,   RINO Uniparty Senator John McCain (D-AZ), has been voted out of the 9th circle of hell!

An aide close to the delicate negotiations told VEN‘s Senior Eschatological Correspondent Michael Serafian that the “delusional” Senator was offering the Vatican a final series of “incentives” —  including billions in US aid as well as guarantees of amnesty in perptuum in Arizona for pedophile priests  — in return for a guarantee that Mr McCain — after death — would have a reserved first-class seat in the The Sphere of Mercury in Paradise where he would have an unobstructed view of the Godhead as well as access to 52 uninhibited dark-eyed virgins who bore a striking resemblance to a young Lindsey Graham.

“That was a complete non starter, even by Vatican standards.  We were almost laughed out of the room.  They told us the best they could do was the 9th Circle of Hell, reserved for the treacherous in life.

“Although it meant an eternity of suffering with the worst people whoever lived, the Vatican representative stressed that at least John would be with colleagues and friends. 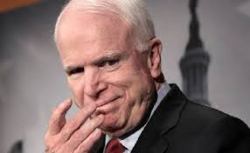 Apparently, the McCain people were ready to ink the deal when they were informed late Sunday that Cain, Judas,  Antenor, and Pope Boniface VIII all objected to being associated with McCain, and the offer was withdrawn pending further negotiations. 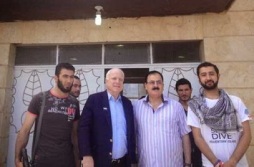 “We’re telling John that his best bet is to follow CIA Director John Brennan’s lead and convert to Wahhabi Islam before it’s too late — we think we can get John a shot at an Islamic Paradise deal with the help of the more radical anti-American Imams, who have always appreciated John’s help through the years, especially with ISIS in Syria.”

“Plan B is to get him into the Viet Cong Heaven — whatever the f*** that is — and we have a team in Hanoi working on that right now.”