VEN (Kabul) — From her provisional capital in Afghanistan, German Chancellor Angel Merkel — responding to complaints from the growing Islamic replacement population — issued a decree Monday, requiring all Germans to start writing from right to left. 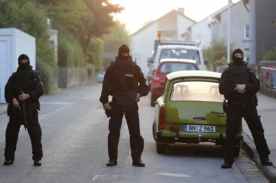 German police have been instructed to randomly enter homes to check on progress, and after six months anyone still writing left to right will faces huge fines and lengthy jail sentences.

“You have left me no choice,”  a clearly frustrated Ms Merkel told an already beleaguered and immigrant-weary German nation Monday.  “The ongoing micro-aggressions against our replacement population must cease IMMEDIATELY!  Or else the consequences will be severe!  You WILL assimilate to the culture of Islam!