“I used to watch my mother pour the flakes into a pot, add the water, and then after she stirred everything  carefully for a few minutes with a wooden spoon suddenly — like magic — we’d have mashed potatoes!  Perfect every time!”  Mr Breen explained from his bed at Milwaukee County Hospital Wednesday.

However,  all that changed this past weekend when Mr Breen’s fiancée — knowing how much he loved mashed potatoes — made them for him from scratch.

“I was peeling the potatoes when Al walked into the kitchen and asked me what I was doing.  When I told him I was peeling potatoes he looked at me funny and started laughing.

“Those aren’t potatoes, honey,” he told me.  “Potatoes are flakes that come out of a box!  I can’t believe you didn’t know that!”

According to authorities, an argument ensued which became heated when Mr Breen’s fiancée googled “mashed potatoes” and showed Mr Breen the results.

A stunned Mr Breen immediately called his mother who — after  initially claiming she had no idea what he was talking about —  reluctantly admitted that yes, real potatoes do not come out of a box;  they are tubers that grow in the ground, but the instant flakes are just as good for you and you really can’t tell the difference. 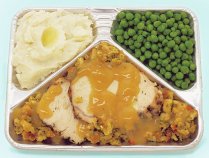 It was at this point that Mr Breen — overcome with emotion — began screaming  AND WHAT ABOUT YOUR HOMEMADE MAC AND CHEESE!  WAS THAT ALL A LIE, TOO!!?  and demanded to know if his mother was lying when she told him how hard she had to work to get all the turkey and fixin’s into her grandmother’s special holiday plates for Thanksgiving dinner.

Displeased with her answer, Mr Breen grabbed a plastic butter knife and tried to slit his wrists,  at which point his fiancée called 911.