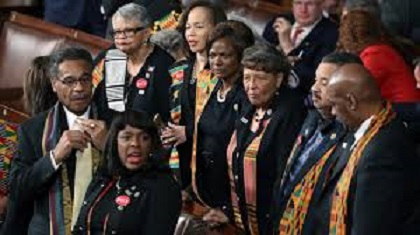 VEN (WASHINGTON)  — Dressed in kente cloth to show solidarity with shithole African countries, Congressional Black Caucus (CBC) members refused to stand when President Trump announced in his first State of Union Address (SOTU) Tuesday that black unemployment is the lowest it has ever been in the history of the United States.

“It was not a protest,” a CBC spokesperson told reporters Wednesday.  “There was a cocktail party earlier Tuesday night at the office of Maxine Waters, and well, to be honest, the CBC members were lucky they made it to their seats at all.

“Once they sat down, there was no way they were standing up again.  So that’s all I’m going to say about that.

“Also,  we will neither confirm or deny that a South African special reserve 16-year-old  single-malt jenkem — a present from   Jacob Zuma to Congressmen John Lewis — was being huffed by several CBC members in the Mens Room of the Old Executive Office Building earlier in the day.

“It is fair to say, however, that the CBC under the divisive, racist Trump administration identifies more as Africans than Americans — and like La Raza Congressman Luis Guitierrez — would have walked out of the SOTU address during chants of USA! USA! if they were able to walk!”