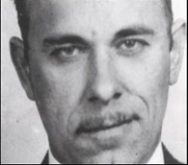 As Ms Golightly explained to reporters Tuesday, “The FBI informed us today that they were unable to transfer the correspondence to the National Archives as mandated by federal law, because — after looking everywhere for three weeks  and ‘literally turning the place upside down’ — they  just can’t find it.

“We have turned the matter over to the Department of Justice.”

insiders as “Gay Edgar Hoover” — had a homoerotic relationship with John Dillinger, whose sensational bank robbing career was driven by a need to impress Hoover and break up his relationship with FBI Associate Director and long-time Hoover catamite, Clyde Tolson. 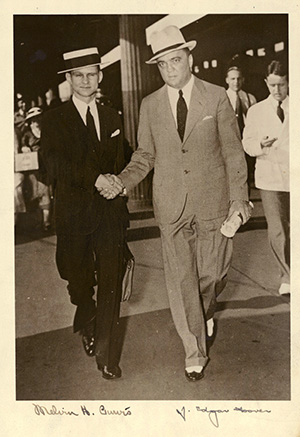 “Clyde even began an affair with Field Agent Melvin Purvis, who — unbeknownst to Tolson — was in love with Mr Hoover, and would frequently meet The Director for homoerotic assignations in Lafayette Park.

“Dillinger became a liability when he threatened to go public with his relationship with Hoover, unless Hoover ‘came clean’ and married him.

“Hoover sent Purvis to Chicago to kill Dillinger, then lured Dillinger to his death by sending him a special delivery letter promising to break it off with Tolson if Johnny met him at the Biograph Theatre, allegedly writing ‘I’ll be easy to spot, Darling, as I shall be wearing that red dress you sent me for my birthday and sporting those Ginger Rogers T-strap Silver Heels you so admire!’

“So Dillinger shows up, Purvis and his agents kill him, and then Hoover breaks it off with Purvis and goes back to Tolson!

“That’s why Purvis quit the FBI in 1935, and committed suicide 25 years later.  Hoover broke his heart!    And it’s all in those letters the FBI say they lost.  Makes you wonder, right?

“And don’t get me started on the Hoover/Pretty Boy Floyd business.  I’m sure the Bureau misplaced all those letters, too!”