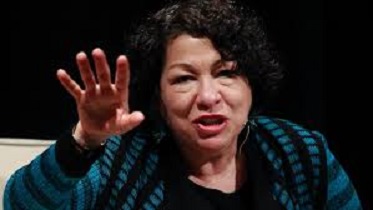 VEN (WASHINGTON) — Zaftig Supreme Court Justice Sonia Sotomayor — known affectionately in her native Puerto Rico as “El Gordo” or simply “El” — caused quite a stir during the annual Las Patas celebration  at her home in Washington, Friday, when a goat ear became lodged in her throat obstructing her airway, after she apparently consumed what authorities believe was a live pygmy goat in less than two minutes.

“We thought it was some sort of Satanic ritual,” an anonymous EMT told VEN‘s Senior Washington Correspondent José Arcadio Buendía.

“The room was covered in blood.  There were remains of what looked like half-eaten goats scattered all over the floor, black lights, candles, people dressed in hooded robes and softball uniforms,  and two goats who escaped their makeshift pen and were bleating in the kitchen.

“Someone was trying to perform the Heimlich maneuver on Ms Sotomayor, but they were unable to get their arms around her.  People were screaming.  It was chaos.

“Luckily we were able to dislodge the goat ear with the jaws of life, and after a few minutes and a large Diet Coke, Ms Sotomayor was fine.

“It was so f***ing weird — an American Supreme Court Justice almost died eating a live goat whole!  You can’t make this stuff up!”