VEN (LAS VEGAS) — In yet another astonishing revelation, authorities investigating the October 1 Harvest Fest massacre in Las Vegas that killed 59 people and wounded hundreds more, now believe that the worn and allegedly slashed tire on alt-right investigative reporter Laura Loomer’s jeep may hold the key to the motive behind the worst mass shooting in American history. 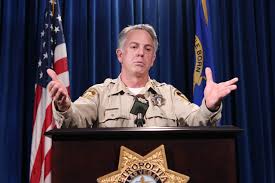 Clark County Sheriff Joe Leopold told reporters Monday that there is strong evidence to suggest that Security Guard Jesus Campos did not flee to Mexico shortly after the shooting as previously believed, but drove to Fairfield County, Connecticut where he located Ms Loomer’s Jeep Cherokee, removed the front tire, and placed Stephen Paddock’s missing hard drive inside it, along with several hundred spent shell casings and a suicide note signed by Mr Paddock confessing to the shooting.

“The plan appears to have been designed to throw suspicion on Ms Loomer.  We believe that Mr Campos and/or his confederates remounted the tire after  intentionally damaging it to make it look like it was over 10 years old, with the expectation that the tire would fail and cause Ms Loomer to crash — possibly suffering fatal injuries — and exposing the ‘evidence’ inside the tire.

“Instead, the tire went flat, and Ms Loomer reported it on social media believing incorrectly that she was targeted by alt-left tire-slashing activists.

“She subsequently had the tire replaced at what we now know to be a Mossad-run garage on the Post Road in Greenwich, Connecticut.

“It is unclear if Ms Loomer was aware of the Mossad connection.

“The mechanic who worked on her car — Chaim Weizmann (aka The Golan Heights Golem), a known Mossad agent — has  disappeared, along with the tire.

“After we notified the Greenwich PD on Friday, they searched the tire heap at the Chickahominy Dump over the weekend, but were unable to locate Ms Loomer’s missing tire.

“However, based on a tip we received late Monday from a reliable FBI informant in New York City, we now believe the tire may have been donated to the Bronx Zoo, where it was turned into a  swing in the Congo Gorilla Forest exhibit.

“We are following up on that lead now.”

When asked how the tire — which failed on August 2 — could have contained evidence of the shooting that occurred on October 1, Sheriff Lombardo referred reporters to the FBI Crime Lab, and reminded everyone that investigators have not yet ruled out time travel or the mystical realignment of time and space as discussed in the more recondite sections of the Jewish mystical text, The Kabbalah.

“Again,” Sheriff Lombardo explained. “We are doing everything possible to solve this case as quickly as we can.”