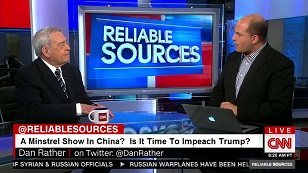 VEN (BEJING) — After editing a news wire video clip and blatantly lying about an “impatient” President Trump overfeeding Kobi goldfish during his visit to Japan, CNN is at it again, this time targeting the President’s 6-year-old granddaughter Arabella Kushner!

Rather than truthfully reporting that the charming little girl was seen on video singing songs and reciting poetry in Mandarin during the President’s stay in Beijing, CNN instead reported that President Trump forced his granddaughter to sing Pick A Bale Of Cotton in blackface, in a short musical number Secretary of State Rex Tillerson’s staff worked up with Arabella and the three UCLA basketball players arrested for shoplifting Monday in Hangzhou, China.

As UCLA basketball coach  Steve Alford explained to reporters Thursday, “There is absolutely no truth to that rumor whatsoever.  My guys suffered a terrible lapse of judgment, did a very poor job of boosting allegedly designer sunglasses,  and got caught; I can’t imagine them being in a tightly choreographed musical number with a very precocious and talented little girl.

“I mean who steals something in a country where they can execute you for forcing someone into prostitution or obstructing a police officer?

“Besides, Beijing is over 1000 miles away.  My guys are currently under house arrest awaiting trial, and — if convicted — could be looking at 3-10 years in prison.

“So a minstrel number with the President’s granddaughter is not anything they’d be involved in.  At least I hope not.”