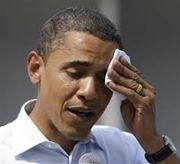 VEN (TORONTO) — In yet another controversial, contemporary mounting of Shakespeare,  The Mapplethorpe Players — an avant guard theater company in Toronto, known for their over-the-top shock-value productions — debuted an LGBTQ version of Othello Wednesday night that portrays former US President Barrack Obama as the gay Moor.

As Director Tommy Tan told reporters Thursday, “We were trying to have a little fun with another old stodgy warhorse in the tradition of Shakespeare in the Parks‘s Trump Julius Caesar, and — if the audience’s reaction is any measure — I think we succeeded!”

In the rewritten LGBTQ version of the play, the actor playing Othello portrays him as a flamboyant, slightly effeminate gay man who is attracted not to Desdemona — as in the original — but to his  young, handsome “Lieutenant/Body Man,” Cassio, with whom he enjoys late-night massages and “taking some steam” in Man Country,  one of the more infamous Cyprus gay bath houses, catering to closeted Venetian generals and their oiled and exotically perfumed Tadzio-esque catamites. 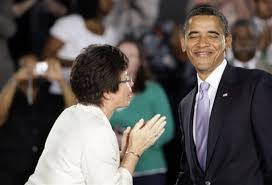 Iago — Othello’s older, spurned gay lover, who (not surprisingly) bears a striking resemblance to   Rahm Emanuel in drag as  Valerie Jarrett — convinces The Moor to kill Desdemona before she outs him both to her father and The Duke of Venice, which — Othello is made to believe — would bring about his demise and put an end to his life-long aspiration of becoming the first Black Gay Islamic Venetian  Doge.

Note that in this production, Cassio is not wounded, but banished to the Wharton School of Business,  after Iago convinces Othello that his “Body Man” is having an affair with the hapless Roderigo, whom — in Act I — a naive Desdemona is inadvertently bearding.