VEN (SEOUL) — While distracting the world with threats of nuclear war with the United States,  Little Rocket man (as President Trump refers to North Korea’s Transplendent Supreme Leader, Kim Jong-un) has been quietly buying up all of the soft pretzel stands and vendors in the continental United States.

“The man is a genius,” one anonymous White House official told VEN Friday.  “He gets everyone looking one way, and then BAM!  he becomes The Big Kahuna of Pretzels!  Now if you want a soft pretzel in, say, Manhattan or St Louis or at a Dodgers or a Red Sox game or Six Flags, you have to talk to Kim Jong-un.” 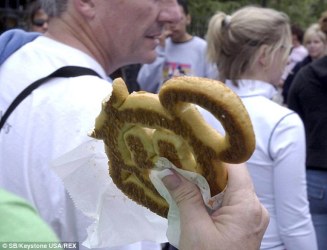 One senior Pentagon official told VEN, that military planners believe Kim Jong-un’s strategy is two-fold — first, to cripple the US economy by raising soft pretzel prices by as much as 500% in major markets, and second, to use the money from soft pretzel sales to fund his nuclear weapons program.

“Basically, he’s got the United States paying for the very nuclear bombs he’s threatening to use against us.  The guy’s a freaking Braniac!  Heads are gonna roll on this one.  Because the smart guys who should have seen this coming, didn’t.”