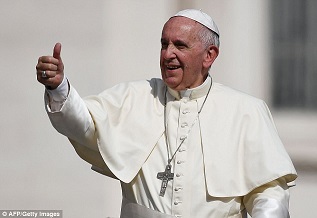 Written in Latin for the better understanding of the Faithful, the letter states that anyone with great piety and love for God who sacrifices his Passion for “the many and various Sirenic Ganymedes of this world” — and that such sacrifice knowingly and inexorably results in a slow and torturous death for the penitent — can now be recognized as a candidate for Sainthood.

In the past,  “conflicted” laity or more typically “disharmonized” clerics who were found to demonstrate a certain unbridled solicitude for their younger inconversant male congregants — but who, for various reasons,  remained celibate in the eyes of The Church — were typically moved from parish to parish, relocated to Rome beyond US extradition (Boston’s Cardinal Law, for example), or simply allowed to retire with their pensions intact to Thailand or Ibiza.

In very rare cases, of course, a priest might be defrocked or even sent to prison.  But only after the authorities somehow became involved or the families of the aggrieved rejected the initial modest cash settlement proffered by The Church.

Church scholars have been arguing for years that abstinence in the face of overwhelming pederastic  carnal temptation should be viewed as a miracle in and of itself, and that the penitent in such cases should be considered a martyr.

Now, apparently,  the Pope has given his blessing to those arguments, and opened the path of canonization to “the misunderstood, the despised,  the tormented yet consonant followers of Christ among  the Catholic Faithful.”

NAMBLA hailed the decision as fabulous.  And long overdue.