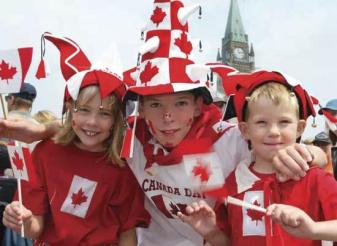 “They painted places for us to stand within the Maple Leaf outline,” John McMaster told reporters Monday.  “And after they took the photo, when we tried to leave we couldn’t.  We were glued to the pavement!  Thousands of us!  It was terrible!”

LeBlanc Construction of Montreal — hired to create the maple leaf template — denied responsibility for the mishap.

As President and CEO Marcel LeBlanc explained to reporters Sunday, “We have been making giant leaves for people to stand in for years.  This is the first time anyone — let alone everyone, thousands they tell me — was glued to the pavement. She must have been, you know, a bad plan!”

Authorities had to fly in solvents from the United States to release the glue, which took the better part of the day to arrive.

After waiting hours for relief in the hot sun, many unfortunate participants finally stepped out of their shoes and went home.

The Royal Mounted Police are investigating the incident.