VEN (CHICAGO) — Brittany Scoles was a normal, happy elementary school teacher who volunteered at her community center, never missed an episode of  Orange Is The New Black,  and wrote a popular blog  on diet and exercise, Fit ‘N Fat, something the confident plus-sized single mom felt very passionate about.

Then suddenly in October, 2016, that all changed when she was diagnosed with Trump Derangement Syndrome.

“I was watching the second Presidential debate.  My mouth got very dry.  I remember thinking OMG I was going to die.  My life partner called 911.  I was in the ICU for three days.  Then after a week of  examinations and tests (I had four MRIs!), my Physician’s Assistant told me I had Trump Derangement Syndrome.  Apparently, there’s no cure.    I just have to learn to live with it.  But I don’t want to live with it.

“I lost my job, stopped exercising, gave up my blog, became a shut in.  I even stopped using my Neti Pot and got a very bad sinus infection.  Some days I can’t even get out of bed.

“All I can do is watch CNN and MSNBC — Rachel Maddow,  Don Lemon, Anderson Cooper,  those guys became my heroes.  I hate Trump so much!  He made me so crazy angry over Putin and Russia I forgot to feed my goldfish.  I had Susan B Anthony for 3 years.   I rage at him and those alt-right f^^^s all day on Twitter.   That’s as much as I can do.  Because of that orange faced freak, my whole life has come to an end!  It’s so f***ing unfair!  I hate him so much!”

Dr Aldous Vardebedian, the head of the Department of Psychiatry and Behavioral Sciences at Johns Hopkins University, tells VEN that not only is Trump Derangement Syndrome  real, it’s actually getting worse, and many believe it’s now reaching pandemic proportions.

“It’s not just a diurnal phenomenon, nor is it an isolated event. Patients all over the world

are reporting the same recurring lucid dreams where they see former President Obama and Eric Holder or sometimes Hillary Clinton and Loretta Lynch, even James Comey, in prison.

up by Trump!  Sometimes they see themselves in prison with them.  It’s remarkably similar to the abduction accounts studied by John Mack at Harvard.

“Many also believe that Putin and Trump are in business together and will force third-world immigrants to become caddies or coal miners or parking valets at Trump hotels. 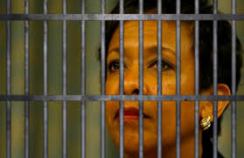 “They become so enraged over news reports focusing on the President, that they begin to experience recurring and extremely violent amygdala hijackings, which in almost all cases result in negative experiences with family, friends, co-workers, and law enforcement.

“That’s typically when they are referred to us.  And we tell them all the same thing — resist.  Not Trump, but the temptation to act out like a child.   Try to get control of your emotions and stop reacting viscerally all the time to things beyond your control.  Behave like a mature man or woman. Put things in perspective.

“Of course, that’s the last thing they want to hear.  So we get a lot of counter-productive emotional transference at that point —  the analyst is literally Hitler, an alt-right NAZI or a bigoted Trump voter who probably owns stock in coal mines and so forth, and they break off the therapy and presumably continue to decline.”