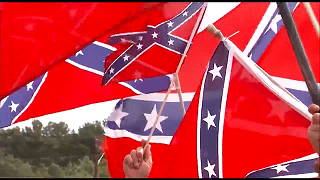 VEN (Stone Mountain) —  At the annual gathering of White Supremacists outside of Atlanta Sunday,  KKK Grand Dragon Claud Merriwether told a crowd of several thousand supporters — many wearing Confederate flag shirts and waving the Stars And Bars —  that he is asking Congress to demand that former slaves pay reparations for being freed after the War Of Northern Aggression.

“The War Of Northern Aggression was fought over many things — chief among them tariffs, state’s rights,  and the future of Western expansion.  But the one thing it was not fought over was to free the slaves on the Southern plantations.  In fact no slaves were freed during that war.

“However, over 650,000 Americans died fighting that war.  So if Black folks want to believe the fairytale that they are so special that the country went to war to free them, and that half of those soldiers — the Yankees — died trying to free them, well, they better start thinking about reparations then!”

Avery Townsend — a history professor, who was attending the rally — talked briefly with VEN.

“If radical groups keep insisting on reparations for their ancestor’s slave labor, and keep complaining about so-called white privilege, then to be fair, we should start thinking about the exploited Northern factory workers, child laborers, the coal miners, meat packers, the men who built the railroads, the workers in Pullman towns.

“Exploitation and slavery are colorblind, and it’s a very big club, unfortunately.

“As for the so-called Peculiar Institution itself — while certainly unconscionable — how many people realize that only 5% or roughly 400,000 of transported Africans came to the 13 colonies?

“By 1860, there were approximately 4 million slaves in the South.  The planters 10x’ed the slave population.  Despite the inflammatory abolitionist rhetoric, the Southern planters did not work their slaves to death like they did everywhere else in the New World.

“In my opinion, we need to stop the pointless, inflammatory rhetoric on both sides, and find common ground.”

[ Editor’s Note — Professor Townsend’s family emigrated to the United States in 1848 at the height of the so-called Irish Potato Famine that killed 1 million Irish people and forced another million to emigrate.  The so-called famine lasted from 1845-1852,  while the English were exporting enough Irish beef and grain to feed the starving population three times over. ]