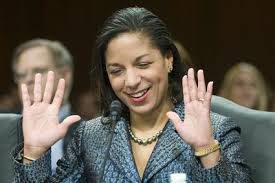 “I want to be very clear.  I did not have illicit sexual relations with  Doggie Daddy.  Yes, Mr Daddy — like many Hollywood celebrities —  contributed time and money to the Clinton and Obama campaigns, and yes, he and I worked together briefly during my time as an advisor to Michael Dukakis.  But we were never what I would call close.

“Frankly, that you would bring up this … fake news — cause that’s what it is — bring it up now, after I spoke out against President Trump is just outrageous!”

Like Danny Williams, the man claiming to be Bill Clinton’s out-of-wedlock son —  Mr Doggie is asking Ms Rice to provide him with a DNA sample, “So we can get this answered once and for all,” Mr Doggie’s attorney, Barry Zuckerkorn, told reporters Thursday.

“But — even without the DNA —  the resemblance is very compelling.   This isn’t about money or publicity.   This is about taking responsibility, doing the right thing, and finally after all these years, stepping up and acknowledging that little Augie Doggie is her son!”