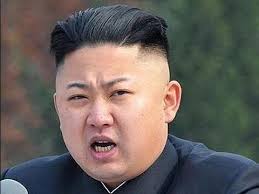 “If I were channeling Brezhnev, then I’d be backing North Korea, instead of planning with our military leaders to turn the place into a perpetual glowing, glass-topped parking lot unless the Most Handsome Man In The World, according to The Onion, get’s his act together immediately.

“And no, President Trump and I are not Russian surrogates in this, being directed by Vladimir Putin to annoy China to the point that they retaliate by adding more melamine to their baby formula and energy drink shipments to the US, so we can use that as a pretext to invade Hong Kong,  as alleged by Nancy Pelosi on CNN.

“And to her other point, if we were about to invade Greenland, why would I be here in South Korea, half way around the world!”