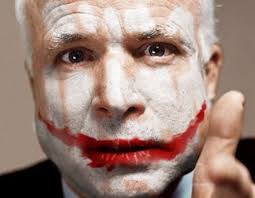 KNN (Editorial) —   Why does John McCain disgust us so much?

Is it the Keating Five scandal?  Abandoning his first wife after she was crippled in a devastating car accident?  His behavior during the fire on the USS Forrestal that killed killed 134 and injured 161?  A fire that — owing to his screw-up reputation — many people still think he was responsible for, by wet-starting his A4’s engine?   His unnecessary and self-serving  lies about how he was shot down,  and his behavior as a POW?  His relentless efforts as a Senator to have all POW/MIA records sealed?    Never a team player.  A traitor to everyone and everything he should have cherished?

A life of a privilege, betrayal, and scandal.  Always a few quarts low on integrity. A petty narcissist with an long and ignoble history of making messes for other people to clean up.

As his former friends and colleagues in the Senate discovered over the years, you can always depend on John McCain; he will always let you down.