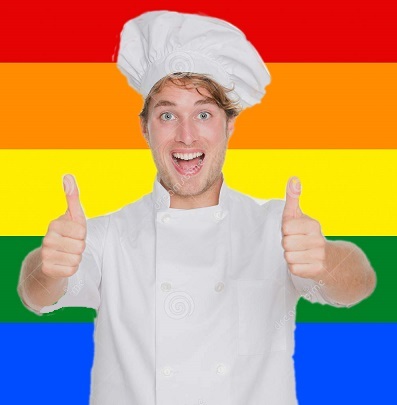 VEN (WEST HOLLYWOOD) —   While Baby Love from a Best of The Supremes mix blared over the sound system, the kitchen staff at legendary  Felcher’s Bakery on Melrose was abuzz with positive energy Tuesday morning, on the heels of Monday’s narrow 7-2 Supreme Court decision, making it illegal to force Christian bakers to cater to LGBTQ-specific designs on cakes, sweets,  pies, and confections.

“Most people in the straight community probably think we’d be out in our best Armani  black kangaroo-leather Johnny Depp ass chaps demonstrating the decision,” owner Tommy Trumance told reporters Tuesday, “but the truth is we were just getting  reamed by gay activists opting to ‘patronize’ Christian bakeries to make a point.

“I mean how gay was that, right?  It was getting so bad that I’d be like out in the street with my shirt off  and my toque in my hand yelling  Hey, who the hell do I have to f*** around here to get a queer to patronize our bakery?

“The gay activist drama queens were killing us!  And the whole thing never made any sense anyway.

“I mean, if you want an authentic Felcher’s Elton John Yellow Brick Road Brum cake you can’t go to a Jesus Hates Gays bakery to demand one, you have to come to us.

“But now thanks to the Supremes our gay nightmare is finally over, and business is booming again.  Even Queer Nation and the GLAAD guys are coming in!

“We couldn’t be happier!  It’s like one big gay Broadway musical revue where everyone’s Tom Hanks in a white sailor’s suit!  In Technicolor!”