be an illegal alien and who fled to Mexico days after the shooting, only to return several days later having gained 40-50 pounds for a heavily scripted interview with popular lesbian comedienne Ellen DeGeneres, who herself has business ties to MGM Resorts — is not behaving like a person who was shot in the leg at close range with a high-velocity .223 round, as he contends.

As one anonymous source told VEN,  “A direct hit at a distance of a 20 or 30 feet from an AR-15 round should  have taken his leg off or produced a massive, devastating wound that would have required numerous surgeries to correct,  assuming he didn’t bleed out in the hallway, which is the more likely scenario.

“And yet, the man doesn’t even have a limp?  That makes no sense whatsoever.” 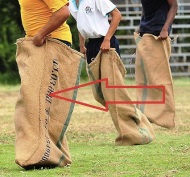 Adding to the skepticism are photographs of Mr Campos allegedly taken two days after the shooting that show him winning a potato sack race at the MGM Grand Family And Friends Picnic, and competing in the adult three-legged race, which he also allegedly won.

MGM Resorts Spokesperson  Angela Barzini dismissed these reports as “ridiculous, idle speculation,” and noted that the photographs in question were taken at the 2016 Employee Picnic a full year before Mr Campos was employed by MGM.

However, digital photography experts now contend that whereas the man on the left resembles Jesus Campos,  the man on the right — who they’re calling  Three-Legged-Race-68 Man — appears 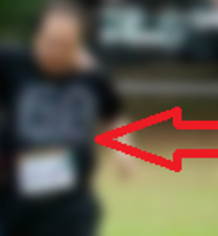 to be none other than crazed shooter Stephen “Mad Dog” Paddock, which — if true — raises even more questions about his connection with MGM Resorts and Security Guard Jose Campos.

As one anonymous researcher told VEN Friday, “Was Paddock supposed to take out 68 people?  Was that the plan?  And did Campos mistakenly shoot him in the head too soon,  not realizing he was 10 short of the intended goal? And is there a larger significance to the number 68?  We just don’t know, and the authorities aren’t talking at this point.”

Reached at his home in Longbeach, California  Friday,  world-renowned numerologist and frequent VEN contributor George Joseph Kresge explained  that the number 68 is not only restaurant code for “put back on the menu,”  but also the numerical value of the Hebrew word HLL meaning to pierce or to be pierced, as well as the height  in cubits of the mythical Egyptian Temple of the Beauty, built in 10, 500 B.C. by the high priest Ra Ta, according to New Age mystic, Edgar Cayce.