VEN (LAS VEGAS) — “To leave this life is, for me, a sweet prospect. I find nothing in it that is desirable, and on the other hand everything that is loathsome.”

So begins what authorities believe is a suicide note written by  Las Vegas shooter Stephen “Mad Dog” Paddock, which he mailed to the LA Times from the Concierge Desk of the Mandalay Bay Hotel on the morning of October 1, less than twelve hours before he killed 58 people and wounded over 500 in the worst mass shooting in American history.

Daily we are propagandized more and more about a rising crime rate. But how do we know it is true? We don’t, for we Americans have little or no access to the truth. Today I went to the police headquarters to see these public records of this rising crime rate and nearly wound up in jail for my trouble. I was searched, interrogated, verbally abused, had my record checked, and finally threatened. Needless to say, I did not see the public records.

The remainder of the note — which authorities believe may contain evidence of a motive — was not released to the public,  since it is undergoing further analysis by the FBI Crime Lab in Washington.

However, anonymous sources tell VEN that the typewritten note — which authorities believe was created  on Paddock’s laptop and then deleted after he printed it — contains a series of rambling invectives against Zionists and Freemasons, casino owners,  Mexicans, former President Obama,  the Federal Reserve, and repeatedly references the infamous  Aktion Erntefest massacre of Polish Jews at the Majdanek concentration camp on November 3, 1943.

Aktion Erntefest means “Harvest Festival” in German, and authorities are now trying to determine if Paddock was making some sort of strange anti-semitic, neo-nazi statement by targeting the audience attending the outdoor Route 91 Harvest Festival Concert when he 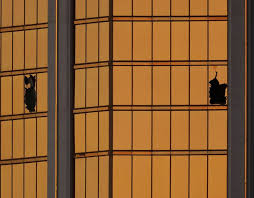 opened  fire on them from his sniper’s nest on the 32nd floor of the Mandalay Bay Hotel,  a location Paddock may have intentionally selected as a twisted reference to the 32nd-degrees of the Masonic Scottish Rite.

In other, developments, VEN has learned that the anomaly of two separate blood stains near Paddock’s body — one dried,  the other not — may have resulted from a Mandalay Bay Hotel employee — possibly incommunicado Security Guard Jesus Campos — covering over an occult message scrawled in the carpet that reportedly read, The Juwes are the men that will not be blamed for nothing.

The FBI has denied that any such writing existed or that any “message” of any kind was intentionally or unintentionally covered up.