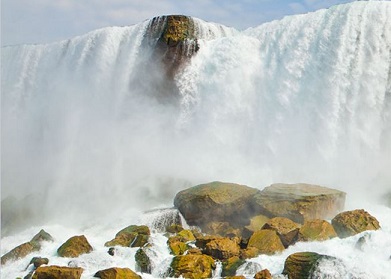 VEN (Niagara) — Octogenarian Claude DeBuyer from Quebec became the first man ever to take on the fury of Niagara Falls in a hat made out of newspaper — in Monsieur DeBuyer’s case, the  sports section from the Toronto Sun!

“Ordinarily, you know, I would have used Le Devoir or La Presse, but the English paper, she work just fine!”

Monsieur DeBuyer had his son, Armand, row him out to Goat Island at daybreak, where he jumped over the side with his paper hat taped securely to his head and a few moments later, was carried over the Falls.

“You have to know what you’re doing, that’s for sure!” Monsieur DeBuyer told reporters Tuesday from his home in Sherbrook.  “You make the wrong folds, you use the wrong tape, the wrong newspaper, then too bad for you —  les carottes sont cuites!

“Luckily for me I have been going over waterfalls in paper hats for most of my life.  Just not this big, of course!”