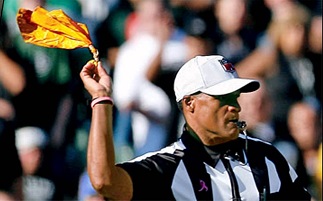 VEN (NEW YORK) — Anonymous sources tell VEN that the NFL Player’s Association (NFLPA) has sent a letter to Commissioner Roger Goodell with a list of nonnegotiable demands, chief among them that the League immediately put an end to what the NFLPA views as the “egregious” racial profiling of black players by the mostly white seven-man officiating crews.

“Soon they gonna put us in handcuffs and send us to prison for bein’ off-sides — which is just another way of sayin’  we actin’ uppity and don’t know our place!  This is 2017!  A strong black man can NEVER be off-sides!”

The NFLPA is asking the League to make sensitivity training mandatory for all officials before they can work a game,  and wants them to acknowledge their “White Privilege” by donating 15% of their 2018 salaries — matched by the League — to fund a BET/Shaun

King documentary on the “plantation culture” of the NFL, which is now approximately 70% black.

They are also asking that the on-field “police presence” be reduced from 7 to 3 officials in an effort to reduce tensions and improve community relations.

Additionally, the NFLPA wants the rule book rewritten before the start of the  2018 season to eliminate penalties that target People of Color — including, but not limited to — punching/kicking an opponent in the face when you think no one’s looking,  pass interference, so-called late hits out-of-bounds, smoking weed before a game,  pretending to urinate like a dog in the end zone, and what is viewed by many as the worst bigoted penalty of all,  delay of game, which the NFLPA contends, reinforces the unwarranted racist stereotype that black people — for whatever reason — can’t get anywhere on time.