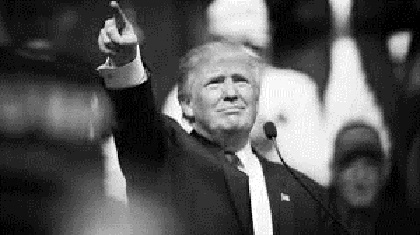 VEN (WASHINGTON) — As the SNHU Arena in Manchester, NH echoed with the now-familiar refrains of Ray Charles’ iconic Hit the Road, Jack, white-supremacist and alt-right, neo-Nazi sympathizer Donald Trump strode to the podium Thursday night amidst cheers and thunderous applause from his cult-like homophobic followers (many clad in Nazi regalia, furiously waving tiny swastika flags), leaned into the microphone, smiled, and spoke the three words that have come to define his 2020 campaign for President — “SEND THEM BACK!”

The response was deafening.

The crowd roared its approval!

A man in the middle of the auditorium lifted up his blonde rosey-cheeked daughter who held a sign over her head that read Trump Puts The GO in NEGRO!

“It was terrifying,” Ana Navarro told her colleagues on The View Friday morning.

“These white supremacists dressed in Nazi regalia giving this President the Nazi salute and screaming Heil Trump, burning black people in effigy, children with little swastikas painted on their cheeks — as a strong black Republican woman I feel ashamed for my country!”

Ms Navarro’s sentiments were echoed by Joe Scarborough who told his viewers that a Trump protester was shot in the head by Trump’s private security, and his lifeless body dragged from the arena to the rabid cheers of the more than 400 people in attendance!

“If this isn’t grounds for impeachment,” his wife Mika opined. “Then I don’t know what is!”

A tearful Michael Moore offered to auction off his classic Thigh-Master to raise seed money for an Anthony Scaramucci primary challenge to Mr Trump.

“It’s like Archie Bunker and Hitler had a hate child,” Rob Reiner told Stephen Colbert. “Trump literally advocated for the killing of blacks and Jews to keep America great! I’m not making that up! He actually said that! It’s just outrageous! Why isn’t he in prison!”

And finally, an outraged Sheila Jackson-Lee delayed her special seafood meal Friday night to tell CNN‘s Anderson Cooper that President Trump wants to put all people of color in Greenland, “where we’d be livin out onna rotunda with a bunch uh nitwits in igloos!

“Anderson, the man is more racist than Colonel Sanders!”