VEN (ROME) — In what many Catholic Faithful are calling a shocking development, the official Vatican newspaper L’Osservatore Romano reported Wednesday that Pope Francis — besieged by yet another inconvenient world-wide pedophile priest scandal involving Cardinals and Bishops and thousands of victims — is planning to beatify Clerow “Flip” Wilson in the first step towards what is expected to be the late comedian’s eventual canonization.

“We are doing this,” an anonymous senior Vatican prelate told VEN, “in order to set the Church on a path of recovery during  this highly charged, defamatory age of rancorous discord and investigative journalism.”

Vatican spokesperson Cardinal Gustav von Aschenbach dismissed concerns that Mr Wilson — a twice-divorced Protestant  — lacked the necessary “Catholic credentials” for beatification, insisting that such objections were the “parochial ravings of reactionary, pre-Vatican II,  neo-Nazi fanatics”  who — the Cardinal claimed —  “are out of step  with the New-Age Catholic/NAMBLA mission of diversity and inclusiveness.”

“This is a man who — like the Pope himself — understood full well that it is the Evil One who plays a commanding role in tempting us into sin and depravity, especially when it comes to the irresistible allure of little boys without bathing suits splashing each other in the Trevi Fountain or — as is the custom in tens of thousands of parishes throughout the Holy See — the highly-charged atmosphere that obtains during  regular unsupervised  rectory sleep-overs where drugs and alcohol and soft-core pornography are made readily available by the Evil One and his minions.” 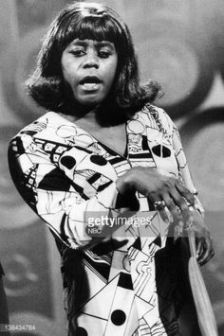 As for evidence of a miracle required for beatification, the Cardinal pointed to numerous instances where Mr Wilson was spontaneously transformed — to the wonderment of his fans — into the revered Geraldine,  known throughout  the Christian world for centuries as The Black Madonna.

“The androgyny, the piety, the profound  sense of sexual fluidity were witnessed by millions around the world on numerous occasions!

“You can even find clips on YouTube.  The Holy Father is correct when he asserts that Flip is beyond a shadow of a doubt the new face of the New Catholic Church!”