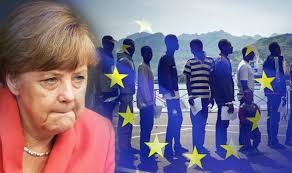 “Speaking the truth about our migrant replacement population simply has no place in Germany!” a defiant Chancellor told the German people Wednesday on national TV.

“Instead of acquiescing to the inevitable,  instead of keeping quiet about the many Migrant Emperors with their pretend new clothes standing naked before an outraged German people, Beatrix von Storch chose instead the dangerous path of righteous indignation,  clarity, and truth.

“MP Storch’s unnecessarily accurate social media posts on Sunday caused many otherwise peaceful migrants to briefly stop defecating in the streets of Cologne, as they tried in vain to blow themselves up by collectively holding their breath in the middle of large crowd of soon-to-be future-former German

“As if that weren’t bad enough, the few migrants in Berlin who could actually read German and had acquired smart phones through stealth, were so outraged by Ms Storch’s posts that they momentarily increased their assaults on dogs and young women,  until — frustrated by their lack of success —  began overturning their makeshift tent accommodations and setting fire to their bedding!

“To everyone everywhere who despises Western Culture and most especially

German Culture and Germans,  please take heart in the realization that in less than 60 years — with the EU policies I have enacted — Germany should cease to exist as a nation.

“That, anyway is our hope, our dream, and I leave it to the next generation of replacement German migrants to carry this dream to its inevitable realization!”