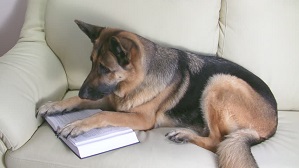 VEN (Alsace-Lorraine) — Rene Barber, a classic mime from Strasbourg  who briefly studied under the legendary Marcel Marceau where he mastered the illusions of walking against the wind and the man trapped in a glass box,  banished his German Shepard Charlemagne to the doghouse Thursday — and at one point may have even tried to kill the disobedient pet —  because of the dog’s intractable (and some say obdurate) preference for German authors over French. 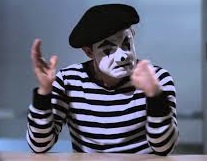 “If he wants to read Flaubert or Molière, then sure,” Monsieur Barber told reporters over the weekend.   “I have no problem with that.  But Nietzsche?  In my house?  Or Thomas Mann?  I was very clear with the animal — we are a French family, we read French writers.  Not the boche!  Jamais les boches!  A bas les boches! Jamais, jamais, jamais les boches!  Pas ici! Jamais ici!”

“I told him in no uncertain terms — I don’t care what your breed is. In this house you read Zola or Proust or you read nothing at all!” 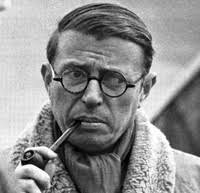 “To do what he did, to defile a work of genius like that,  is simply inexcusable!  ‘All of Sartre,’ he told me, ‘is contained in the preface to  Der Wille Zur Macht, which clearly that ridiculous existentialist  poseur never read!’

“And as if that weren’t bad enough, do you know what he told me when I chained him to his doghouse?  He told me that Jeanne Moreau never looked better than when Louis Malle filmed her without makeup as she walked along the Champs-Élysées in Ascenseur pour l’échafaud!

“He’s not a dog, he’s a pig!  I was so outraged at his Teutonic insolence, I tried to strangle him right then and there with my bare hands,  but of course the animal  overpowered me and bit me once on my leg and twice on my right hand and arm, which — as I’m sure you can understand — is very bad for a mime.” 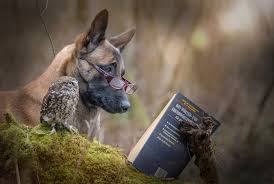 Owing to the timely intervention of Madame Barber, Charlemagne is now in the hands of Alsatian Animal Control (CAA), who are hoping to place the dog with a  well-read German family who — ideally — have the complete works of Hegel,  Holderlin,  Meister Eckhart, and Kant.