VEN — Mr President, in your first inaugural address in March, 1861, you were fairly specific about your views on slavery and tariffs.  Here’s what you wrote:

I have no purpose, directly or indirectly, to interfere with the institution of slavery in the States where it exists. I believe I have no lawful right to do so, and I have no inclination to do so.

The power confided to me will be used to hold, occupy, and possess the property and places belonging to the Government and to collect the duties and imposts; but beyond what may be necessary for these objects, there will be no invasion, no using of force against or among the people anywhere.

Abraham Lincoln — Yes, that’s correct.  When I gave that speech, seven Southern States had already seceded from the Union (South Carolina, Mississippi, Florida, Alabama,  Georgia, Louisiana, and Texas).  We wanted the Southern states to continue paying tariffs on foreign goods, and they felt — perhaps correctly — that this was an unfair burden on them.

VEN — Unfair in the sense that the federal government depended on the tariffs to fund itself, since there was no income tax or other forms of federal revenue.  And the import-dependent South paid 80% of the tariff.

Yet, all of the tariff money the South paid to the federal government went to public works projects in the North — boondoggles, really — like canals and railroads that in almost all cases were unnecessary and in many cases were never completed.

AL — It was a patronage system, and the system was unfair, yes.  The reality was that if you wanted to get elected and stay in office, you had to support tariffs and public works projects, and on a national level you had to support them in Ohio, Pennsylvania, and New Jersey.

The Southern states were caught between a rock and a hard place.  The tariffs were designed to help Northern manufacturers compete against foreign imports.  The planters had two choices —  buy products from the North and pay enormous shipping fees, and then wait for months to take delivery,  or buy better imported goods, pay the tariff, and receive them sooner.

VEN — And none of the tariff money was spent on public works projects in the South.

AL — That’s right.   Since the inception of the Republic the Southern states chaffed at what they always considered unfair tariffs, because they paid most of the tariff and all the tariff money was spent running the federal government and funding  public works projects in the North.

VEN — And then Congress passed the  Morrill tariff in 1860, which President Buchanan — beholden to the Northern protectionists —  signed into law just before he left office in March of 1861.

AL — Yes, and that tariff passed because several Southern states had already left the Union and had no representation in Congress.

The Morrill tariff added fuel to the fire, and  was — unfortunately — more justification that the South was right to secede.  In retrospect, it was a huge mistake.

It raised the tariff rate from 15% to 37% and expanded the list of imported items.  Later, another tariff was proposed that would have raised the tariff to about 47%.  Why would the South want to stay in the Union, or come back after that?

VEN — So in 1861, under the new Republican party and its first Republican president, the import-dependant South saw their tariff burden double and then potentially triple?  And then in your first inaugural address, you threatened to invade the South if they refused to pay the tariffs after seven states had already left the Union?

AL — It was a much-reviled tax collection center.  We manipulated the South into attacking the fort, and then used that as pretext to invade the South. 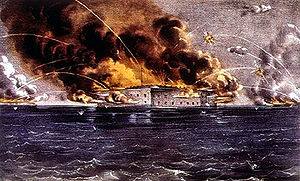 You have to remember, of all the Southern states, South Carolina was the most vocal when it came to tariffs.  They actively resisted the so-called 1828 “Tariff of Abominations,” and declared it and the follow-on compromise from President Jackson null and void and unenforceable, and threatened to secede from the Union.

Most people don’t remember that.

After I was elected president in November 1860, South Carolina voted to secede from the Union in December. The first Southern State to do so.

VEN — This was what you wrote when declaring war on the South, and later implementing what many saw as an illegal blockade.

First, the declaration of war on April 15:

“Whereas, the laws of the United States have been for some time past, and now are opposed by  combinations too powerful to be suppressed by the ordinary course, now, therefore, I call forth the militia of the  several States, to the aggregate number of 75,000, in order to suppress said combinations, and to cause the laws  to be duly executed.”

And the blockade on April 19:

“Whereas an insurrection against the Government of the United States has broken out and the laws of the United States for the collection of the revenue cannot be effectually executed therein:  Now, therefore, I have  further deemed it advisable to set on foot a blockade of the ports within the States aforesaid.”

VEN — We don’t see any statements in either war proclamation about slavery, which many people today claim was actually the cause of the Civil War.  So for those of us still confused — what role did ending slavery play in the Civil War?

AL — None.  Ending slavery had no role whatsoever in the Civil War. The so-called Civil War was fought to force the Southern states back into the Union and force them to continue paying the tariff.  Without the tariff and with a fractured Union we believed we were looking at the complete dissolution of the United States (sighs).

And you know, we thought it would be over fairly quickly. Some argued it would not last beyond the first encounter at Bull Run.

VEN — But you were wrong.